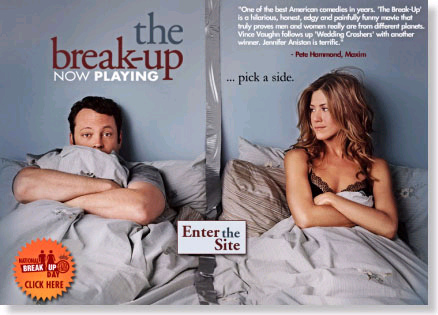 I have been watching many romantic movies, or movies talking about love, but I think this movie, The Break-Up, is the most right one for couples to watch.

The very first time I wacthed this movie was about 2-3 years ago on the plane to have my vacation in Malaysia. I love Jennifer Aniston a lot since I learned her part in "Friends", I think she is pretty, has this funny personality in Friends, and maybe I don't see too many different charactoristics in the movies she played before, but I think we just love the way she is. I remember I cried a lot in the first time I watched this movie, I guess the reason I cried because I didn't totally walk out off my last relationship yet, and one other funnier reason is that I got the same English name, Brooke, as the charactor Jennifer plays in this movie.

I think if you are a girl who is in a relationship, or have had a relationship, you will understand very well what message this movie wants to deliver. And if you did experience similar situation, it may earn your tears, or you may even force your boyfriend or wish your ex will see this movie one day, so that he could probably understand what the hell you were/are thinking of.

One very common scenario in every relationship is that gf wishes her bf to know what she wants, but bf complains that he doesn't know if gf doesn't speak it out. For example, in the movie, Brooke cooked a meal for her and Gary's family after work, and she wishes Gary could help to do this dishes, but Gary insists to do it later after he chiles by playing vedio games. Brooke doesn't like to leave the dishes in the sink next day, and she isn't quite happy about Gary not helping at all when she did all the cooking, and bought only 3 lemons back home, when she asked for 12. They argued a little till Gary gives this bad attitude by throwing away the remote and finally, give it up to go wash the dishes for Brooke. But till this point, Brooke doesn't want his help at all which make Gary confuse, because all the conflicts started because he didn't help to do the dishes, and why Brooke now refuses him to help. I guess Gary will never understand that Brooke wishes Gary "wants" to offer his help, not only do it after she "askes" for it. For Gary, his point is if you don't "ask", I will never know.

So, guys...do you "see" the difference?? I guess guys will never understand why Brooke will say "you never sent me flowers" if Brooke did tell Gary that she doesn't like flowers when they first met. And Brooke argues that "girls all like flowers". The point isn't the flower tho, it's about "feeling". My friend, Gino, has complained that girl is way too complicated to understand, even he is from the romantic country, France. I bet he gets confused too if his gf does the same as Brooke did, because girls focus more on "feelings or what words mean behind" but guys focus more on "pratical things or what words mean litterally", and I guess that's caused by all those years, mostly men work to earn money, and women take care kids. Men follow order from boss, and meet the requests from customers in words while women have to feel what their kids want when their language ability isn't well built. Even after years, women started to play different roles from the past in the society, they are still considered to be more emtional somehow.

Another thing I found so real in this movie is that when Brooke did all the trick to see if it can make Gary to feel it's his lost to lose her, and he would want to ask her back, Gary only thinks Brooke wants to move on her life, so he wants to prove his life coule be much more exciting than hers. And even, after Brooke soften her position to show her good will, he still thinks she doesn't mean it. And when he sees Brooke crying, he defense himself by saying "he doesn't know" and "why you didn't say so"? Therefore, it brings to the end!

This movie brings a lot of real issues happen between couples. When girls watch this movie, they will think "see, look at what you guys do, and why don't you just know it by yourself" and when guys watch this movie, they will think "see, look how complicated you girls are, and why don't you girls just say so." It's very normal, but we also have to stand in each other's shoes if you really mean to make the relationship work. Remember that girls think with their hearts, and guys think with their heads.

I also love this movie's ending. After months they broke up, they met on the street. Gary seems to become a better man, and Brooke starts her own life pretty well. They are happy to see each other doing so well, and then walk away for their own life, even they promised to see again.
I am not sure how to describ the feeling they try to deliver, but it means something deep for me. I could only tell you that "you know...you know the feeling...you know, right?!", but what is it?...I cannot tell you in words, and maybe that's why I am a girl. 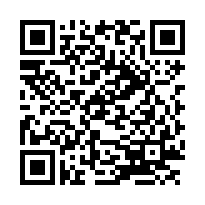